Background: The American trypanosomiasis, Chagas disease, is a parasitic infection typically spread by triatomine vectors affecting millions of people all over Latin America. Existing chemotherapy is centered on the nitroaromatic compounds benznidazole and nifurtimox that provide unsatisfactory results and substantial side effects. So, the finding and exploration of novel ways to challenge this neglected disease is a main priority.

Methods: The biologic and biochemical progress in the scientific knowledge of Trypanosoma cruzi in the period comprising last 15-years has increased the identification of multiple targets for Chagas´ disease chemotherapy. In the middle of the best encouraging targets for trypanocidal drugs, ergosterol biosynthesis pathway and cruzipain, a key cysteine protease (CP) of T. cruzi, have been pointed out. Unfortunately, recent clinical trials investigating the administration of pozoconazole and ravuconazole to chronic indeterminate Chagas disease patients revealed their inferiority compared to the standard drug Benznidazole. Results: In view of the information gained in the preceding years, a reasonable approach for the fast development of novel anti-T. cruzi chemotherapy would be focused on K777, the cysteine proteinase inhibitor (CPI) near to enter to clinical trials, and founded on the clinical evaluation of combination of known drugs with existing trypanocidal agents to obtain more efficiency and less secondary effects. Top series of xanthine have been recently identified as clinical candidate for Chagas disease. In addition, trypanothione biosynthesis, thiol-dependant redox and polyamine metabolism, the glycolytic, glyconeogenic, pentose phosphate, lipidic and polyisoprenoid biosynthetic pathways, and the enzymes from biosynthetic glycoconjugates pathways have been studied. Several specific enzymes from these particular biosynthetic pathways such as hypoxanthine-guaninephosphoribosyl- transferase and farnesyl-pyrophosphate synthase, among others, have also been broadly studied in T. cruzi. Novel synthesized anti-T. cruzi compounds with or without specific single or multi-target assigned are also described in detail. Conclusion: In summary, loans on anti-Chagas disease agents focused to specific parasite targets as their metabolic pathways or specific enzymes will be summarized. Targets will also be specifically discussed. Patent literature collected and published from 2000 to 2015, alleging inhibitors for specific T. cruzi targets or trypanocidal activity was achieved over the search database from Delphion Research intellectual property network including international patents and the European patent office, Espacenet. 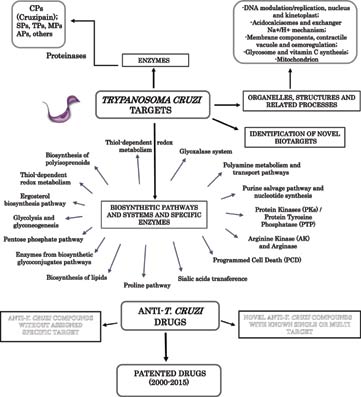