Background: Wolbachia is the most common endosymbiotic bacteria in insectborne parasites and it is the most common reproductive parasite in the world. Wolbachia has been found worldwide in numerous arthropod and parasite species, including insects, terrestrial isopods, spiders, mites and filarial nematodes. There is a complicated relationship between Wolbachia and its hosts and in some cases, they create a mutual relationship instead of a parasitic relationship. Some species are not able to reproduce in the absence of infection with Wolbachia. Thus, the use of existing strains of Wolbachia bacteria offers a potential strategy for the control of the population of mosquitoes and other pests and diseases.

Methods: We searched ten databases and reviewed published papers regarding the role of Wolbachia as a promising drug target and emerging biological control agents of parasitic diseases between 1996 and 2017 (22 years) were considered eligible. Also, in the current study several patents (WO008652), (US7723062), and (US 0345249 A1) were reviewed.

Results: Endosymbiotic Wolbachia bacteria, which are inherited from mothers, is transmitted to mosquitoes and interferes with pathogen transmission. They can change the reproduction of their host. Wolbachia is transmitted through the cytoplasm of eggs and have evolved different mechanisms for manipulating the reproduction of its hosts, including the induction of reproductive incompatibility, parthenogenesis, and feminization. The extensive effects of Wolbachia on reproduction and host fitness have made Wolbachia the issue of growing attention as a potential biocontrol agent.

Conclusion: Wolbachia has opened a new window to design a costly, potent and ecofriendly drug target for effective treatment and elimination of vector-borne parasitic diseases. 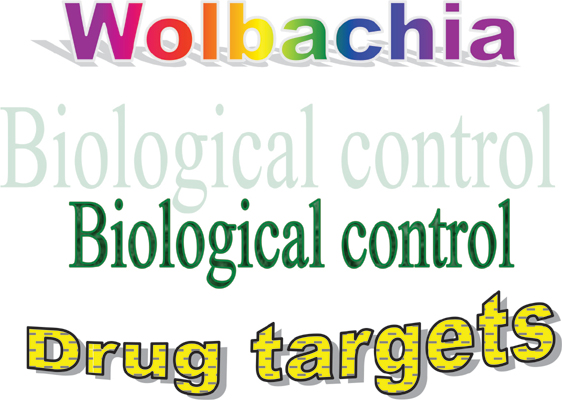